Mesopotamia civilization is the civilization which was found between rivers Tilgris and Euphrates now present in countries like Turkey, Syria along with major part of Iraq having following civilizations, 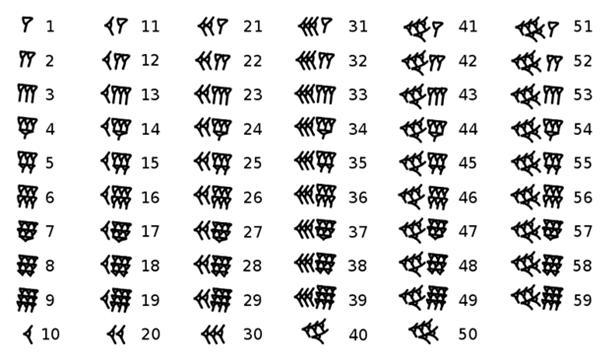 For Numerals greater than 59, they used place system method:

# Division: They also had prepared tablets consisting of reciprocals of many numbers.

Of several table one of the table they prepared is

For calculating ‘a/b’ they followed the concept of a x 1/b.

From the reciprocal tables they prepared they used to find 1/b and then multiply it by a to get a/b.

If observed carefully they didnt calculate reciprocals of prime numbers except 2, 3 and 5(prob because 60 is divisible by only these prime numbers). For reciprocals of other prime numbers they used to follow technique of proportion and approximation. They would write 1/13 = 7/91 = 7 x (1/91) =(approx.) 7.(1/90) and these values were obtained from the tables.

And for obtaining square root they used to check the same squares table in reverse way.

Now they used to check the table to get the closest value to RHS and corresponding value of n would be equal to y. From y they used to calculate x.

One of the tablets showed that they had some knowledge of the pythagorus theorem (arnd 1500 years before Pythagorus was born).

Tablet Plimpton 322 has been found which has the Pythagorus Triples.