Indian Classical period starts around 400 AD and ends in 1200 AD. This period is often considered as the golden period for Indians in terms of science, technology, mathematics, astronomy, engineering, art, logic, philosophy, and religion. Restricting us to mathematics, people like were born in this period and had made immense contributions in the field of mathematics and astronomy. [wptabs style=”wpui-narrow” effect=”slide” mode=”horizontal”] [wptabtitle] Aryabhata[/wptabtitle] [wptabcontent] It was this period in which Aryabhata was the first to tell many astronomical facts like earth is round, sun is the center point of solar system and all the planets revolve around sun, earth spins around its own axis, cause of day and night, etc. He also made huge contributions in mathematics as well. Although ancient Indians had been following decimal numeral system from the Harappan civilization, still there was no place value system. Decimal place value system was seen in Aryabhata’s Aryabhatiya book and this is considered as the turning point of mathematics and biggest contribution in the field of mathematics which gave rise to ‘0’ . Aryabhata didn’t invent ‘0’ symbol. Infact he did not use any of the symbols (1-9) though Brahmi numerals were widely used around same time but he did invent a place value system where ‘0’ can be fixed (place holder). Also he used words for the numbers and to denote the place value system. He used the word to denote nothing (0) and it was later used as “ZERO”.(see more in Hindu Numerals goes West Section)

Earlier Babylonians had Place value system but they were not consistent. They used “ “ and (space) to denote 0. They would right 108 as 1”8 or 1 8 but they didn’t follow it always especially when 0 use to come at the end. So for them 180 was written as 18 and hence there was no differentiation for 180 and 18. Mayan although had separate symbol for 0 (Shell) but they did not follow the place value system to great/perfect extent and also because of their geographical location their numerals could not reach the European and Asian world and by 1200 AD, the Hindu numerals (0-9) were spread across the Arabs and Europeans.

So Aryabhata is considered as one resposible for the introduction of 0 and the place value system in mathematics. Aryabhata was born in Taregna, small town in Bihar. For study purpose he had gone to Kusumapura (town in Bihar) and stayed there for long time.He had many contributions in the field of mathematics like arithmetic, algebra, geometry, plane & spherical trigonometry, Fractions, Equations, etc. At the age of 23 he wrote book which is a treatises on mathematics and astronomy. Along with Aryabhatia, he wrote couple of books, but only Aryabhatia could survive. Aryabhatia is divided in 4 padas/chapters:

It is a system of numerals based on Sanskrit phonemes and was mentioned in Gitikapada of Aryabhatiya. Aryabhata’s numeral table

Aryabhata worked on approximation of pi and concluded it as irrational number.He mentions

Because of his immense contribution in the field of astronomy, 1st Indian satellite was named after him. Aryabhata is regarded as one of the greatest mathematician and astronomer ever lived.

Very less is known about Varahamihira in terms of mathematics but he and his son made huge contributions in terms of astrology, astronomy and mathematics. He is well known for 2 books ‘Pancha Siddhantika’ which had topics on mathematics and astronomy and ‘Brihat Samhita’ had information related to planetary movements, astrology, human interest like relations, architecture, precious stones, etc.

Restricting us to mathematics. Varahamihira is known for discovery of very basic trigonometric formulae’s like

Varahamihira improved the accuracy of the sine tables of Aryabhata I and calculated the binomial coefficients, known in the European civilization as Pascal’s triangle.

Although Varahamihira had not much contributions in mathematics as compared to others but he was very influencial in the school of Ujjain and had influence on Brahmagupta who studied in same school.

It is however said that he lived and worked later in Ujjain where Varahamihira worked previously. He had large contribution in the field of mathematics and astronomy and was best known for his work in ‘Brahmasputa Siddhanta’ in the year 628 AD. He along with Bhaskara I were the 1st to use the ‘0’ symbol in their respective Siddhantas.

Brahmagupta stated the rules to work with zero and negative numbers.

He dealt with zero, positive (property) and negative (debt) numbers are follows:

Self explainatary; Every 2 steps are repeated till 0 is obtained else continue to get answer in decimal form; Hence applicable to Perfect/Non-perfect square 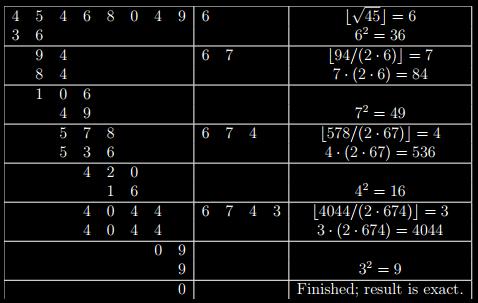 where s, the semiperimeter, is defined to be

Summation of squares and cubes:

Apart from mathematics he had also good amount of contribution in astronomy and science.Along with lunar and solar eclipses, Brahmagupta states that Moon is closer to Earth than Sun, earth is round else trees would have fallen from earth. He also states Gravitional Force as “Bodies fall towards the Earth as it is in the nature of the earth to attract bodies, just as it is in the nature of water to flow”.It is believed that Arabs have learnt from Brahmagupta. Muhammad al-Fazari translated Brahmugupta’s work into Arabic and which gave rise to Arab astronomy and their calendar.

[wptabtitle] Bhaskara I[/wptabtitle] [wptabcontent]
Bhaskara I (600 – 680 AD) was born in Parbani district of Maharashtra.
He wrote commentary on Aryabhatiya in 629 and named it as Aryabhatiyabhashya which had contents/comments on Aryabhata’s work of mathematics and astronomy. He also wrote 2 more books called as Mahabhaskariya and Lahubhaskariya which were again had topics of mathematics and astronomy.

Bhaskara along with Brahmagupta were the the 1st to make use of number ‘0’ in their mathematical books and like Aryabhata categorized pi as irrational number.

He gave rational approximation of sine function in book Aryabhatiyabhashya as

He also had contribution in other mathematics topics like solving linear equations, quadratic equations, indeterminate equations, etc and in astronomical topics like determining longitudes of planets, association of planets with each other, Eclipses, Rising and setting phenomenon of sun, etc.
[/wptabcontent]
[wptabtitle] Mahavira[/wptabtitle] [wptabcontent]
Mahavira (around 850 AD) was a jain mathematician from Gulbarg town of Karnataka.

He wrote a book on mathematics called ‘Ganita Sarasangraha’. Because of his work he became very popular in south in those days.

He was the 1st to tell that square root of negative number does not exist.

He provided formulae to calculate area and perimeter of cyclic quadrilateral along with that of ellipses.

where x & y are the diagonals and a, b, c & d are sides of cyclic quadrilateral.

He provided the general formula for Combinations as

Mahavira knew that the quadratic equation have 2 roots.

He gave the formula as: a (rn – 1) / (r-1)
[/wptabcontent]
[wptabtitle] Bhaskara II[/wptabtitle] [wptabcontent]
Bhaskara II or Bhaskaracharya (Bhaskara, The Teacher) (1114 – 1185 AD) was born in Vijayawada, Karnataka.
He was the head of astronomical observatory in Ujjan, the leading mathematical center of ancient India. He was mathematician and an astronomer and is considered as one of the greatest mathematician along with Aryabhata and Madhava.

He wrote Siddhanta Shiromani around in the year 1150 AD which had 4 sections:

Bhaskara II died in year 1185 and this brought to the end of Golden Era (Classical Age) of Mathematics.

Around that time there was continuous invasions by Mughals, and hence life of people especially in northern and central part of India was disturbed and hence mathematics dried in these areas. But South India was not affected and mathematics now started growing in the southern part of India (Indian Medieval Period).