We owe a lot to the Indians, who taught us how to count, without which no worthwhile scientific discovery could have been made.…Albert Einstein

We have already seen how the Indian Numerals (Decimal system) evolved from Harappans to Kharoshti to Brahmi and Bhashali numbers giving different symbols from 1-9.

Invention of 0 and Place Value System

Many have misconception that 0 was invented by Aryabhata. No, its not true… meaning of 0 as emptiness, nothing, void (used for meditation) was already known to Buddhist and Jains around 600 -700 years before Aryabhata and it was called as “Shunya”. Aryabhata invented “Place Value System”.

The symbol ‘0’ was seen in Jain book ‘Lokavibhaga’ as early as AD 458 and Aryabhata was born in 476AD.
As seen earlier Aryabhata never used any symbol for numbers, he used words. He used ‘kha’ as placeholder to denote nothing(empty).

Eg: 306, Aryabhata will denote 0 as kha for separation purpose or to denote nothing (Babylonians used “ or ‘ ‘ for same but were not consistent) and hence differentiating 306 and 36. This gave rise to the place value system which we follow today. Later ‘kha’ was replaced by 0 which meant same: nothing and later 0 was used by many Indian scholars like Brahmagupta, Bhaskara, etc in their books.

Brahmagupta is considered as the teacher of Arabs. Brahmagupta’s book ‘Brahmasputa Siddhanta’ is believed to be translated in Arabic/Islamic language. Because of such books, Arab could understand the astronomy and which helped them to prepare their own calendar.

Hindu numeral system (0-9) came in notice and fame in 825 AD , when by Persian famous Mathematician Al-Khwarizmi wrote a books On the Calculation with Hindu Numerals and On the Use of Hindu Numerals in the year 830. Since then Arabs started using Hindu numerals in schools, markets, all over the Arab.
As Europe is closer to Arab, lot of trade and communication was present between them and during such communication European came to know about the numerals which they called Arabic numerals (but now they are famous as Hindu numerals/ Hindu-Arabic numerals). These numerals 1st appeared in Europe in 976 in the book Codex Vigilanus.

But the numerals did not come in fame in Europe until Italian mathematician Fibonacci introduced them in 1202. Fibonacci studied in Algeria and there he came to know about these numerals and their wide usage because of their simplicity and hence published a mathematics book Liber Abaci in Europe.

But European were still following their cumbersome Roman numerals which had been around for 1000 years and had been doing calculations on their Abacus instrument which looked to many as comfortable and safe than the Hindu numerals which had to be written to calculate. But as the days progressed and printing came into effect and the fact that Roman numerals were not only cumbersome but also not very accurate when it came to fractions (decimals). Roman numerals just could not match the simplicity of Hindu numerals and finally started declining giving rise to Hindu numerals. In the year 1549, in the book Libro Intitulado Arithmetica Practica these numerals were termed as modern numbers.

The great mathematician Laplace says
The ingenious method of expressing every possible number using a set of ten symbols (each symbol having a place value and an absolute value) emerged in India. The idea seems so simple nowadays that its significance and profound importance is no longer appreciated. Its simplicity lies in the way it facilitated calculation and placed arithmetic foremost amongst useful inventions. the importance of this invention is more readily appreciated when one considers that it was beyond the two greatest men of Antiquity, Archimedes and Apollonius. 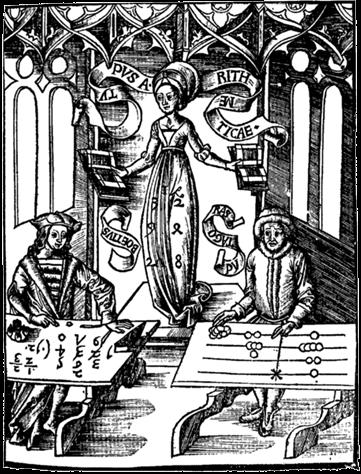 Face expressions of 2 gentlemen tells whole story (1 with Hindu numerals looks so calm and comfortable whereas other with Abascus looks so tensed).