Although Greek civilization began from 2000 BC, it is believed that Greek Mathematics started around BC 700 which can be divided to periods, Classical Age from 700 – 300 BC and Hellenistic period from 300 BC- 400 AD and location extended from parts of Italy, Libya, Egypt, Greece and Turkey . Initially communication was done orally but later they started making clay tablets similar to Babylonians, writing on Paprus rolls and writing on wooden boards.

Later around 4th century BC, it got replaced by Ionic number system where symbols were used instead of numbers. 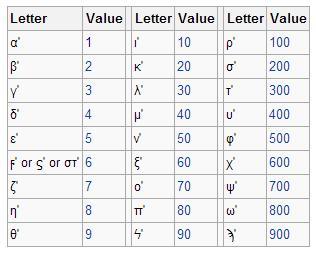 They also used with another system which were similar to Roman numerals and were similar in terms of complicacy as well.

Because of their complex number system, like Romans, they were not so go good in arithmetic’s as compared to their expertise in Geometry (We will see more on numerals in Romans topic). Greeks were very good in Geometry. Many great mathematicians like Thales, Pythagoras, Euclid, Archimedes, etc were born in this period.

was born around 625/624 BC and died in 547/546 BC. Thales was the 1st Philosopher and mathematician of Greek civilization and he is believed for starting western philosophy. None of his work survived today but in those days they used to transfer the knowledge orally and was passed to the pupils which in turned passed to the next generation. It is believed Pythagoras was pupil of Thales.
In his teenage life he visited Egypt, stayed and learnt there and then brought geometry to Greece. During his stay in Egypt he successfully was able to measure the height of pyramids using the geometrical properties of similar triangles and the length of shadows. He would wait till his height and his own shadow’s height match each other and then he would measure the length of shadow of pyramids. Thus rightly he is given the credit for properties of similar triangles. 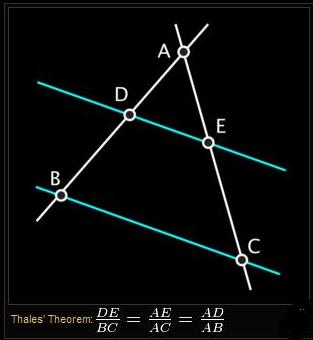 Using above theorem he could find the important values like distances of ship from the shore.

Another well known Thales theorem is ‘Angle inscribed in a circle, with 1 side as the diameter, is always equal to 90 degrees.’ 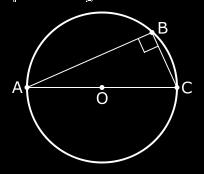 Some other properties/propositions of geometry he stated are:

He used geometrical knowledge to predict the next solar and lunar eclipses.

Thales was the first to state that everything has evolved from water and he believed that earth is flat and floated on water.

It is believed that Samos was his teacher and he recommended Pythagoras to visit Egypt and collect knowledge. At the age of 23 he visited Egypt and stayed there and Babylonia for almost 21 years. Later on his return it is believed he went to India for studying geometry and more about of Gods.

Voltaire, the famous French writer and philosopher) stated that ” I am convinced that everything has come down to us from the banks of the Ganges, – astronomy, astrology, metempsychosis, etc. It is very important to note that some 2,500 years ago at the least Pythagoras went from Samos to the Ganges to learn geometry…”
Abraham Seidenberg, author of the authoritative “History of Mathematics,” credits the Sulba Sutras as inspiring all mathematics of the ancient world from Babylonia to Egypt to Greece.Baudhayana(born around 800 BC) in one of the Sulbha Sutras had used the right angle triangle property which is today known as Pythagoras Theorem but no proof of it was provided. Also In one of the tablet prepared by Babylonians around 1000 BC same property of right angle triangle was seen.

It is believed that Pythagoras and his students were first to prove the same theorem. But in any of the case this property is one of the most important property in geometry and using this properties many theorems/properties are proved.

Around 400-500 years after the death of Pythagoras, this method/property was credited to Pythagoras and was named it as Pythagoras Theorem by his fellow companions.

Pythagoras considered himself as philosopher than mathematician. He had formed a religious group in Samos by the name Mathematica and later people of that group were called as Pythagoreans. He considered mathematics as the path of understanding everything.

Apart of Pythagoras theorem he and his group had contributed in mathematics in many ways.

Euclid is considered as Father of Geometry. Why?? Aren’t people like Pythagorus, Thales, Baudhayana, etc were born before Euclid?? Yes… that’s true. But he provided complete framework to geometry in the form of 13 volumes of books and that’s the reason he is rightly considered as . In these books he has mentioned all things starting with most basics points of geometry that each of us studied in the very earliest stages of geometry i.e. the definitions/properties of point itself with that of line, ray, curves, segment, drawing perpendicular bisector of a line, axioms, postulates and almost all the terms which are used in geometry. ”The Elements” consists of plane geometry, solid geometry, number theory, conics, postulates, definitions, proofs, etc. These books consist all the above terms with proofs. Hence rightly “The Elements” are considered as the framework for geometry.

In ancient times teachers used to attach a small notice on the doors where they taught saying “Let no one come to our school who has not learnt the Elements of Euclid”. In fact before 19th century Euclid’s Elements were considered as the 2nd most printed book collection after ‘Bible’.

He started with very basics like axioms and postulates.

was born around 287BC and was assassinated by Roman soldier around 212 BC.
He was the first person to measure large area using the method of exhaustion and also he measured large area by addition of infinite small areas which together can be termed as Calculus. Archimedes had written all his writing on a book which is today called as ‘Palimpsest’ but unfortunately it was not noticed till the beginning of 20th century else Calculus could have termed as invented around 2000 years prior to the date when Newton (Father of Calculus) stated this phenomena which in the year 1667AD and definitely world would have been more modern at least in terms of mathematical subjects like cosmology, space, etc. In fact many consider Archimedes as Father of Calculus.

Archimedes was physicist, Engineer, Inventor, Astronomer but his true love was mathematics.

So he inscribed a triangle in a circle but as large area was present between circle and triangle he reconstructed the triangle by dividing each side in 2 so the figure inscribed in circle now was having 6 sides (Hexagon). He continued same till a 96 sided figure inscribed in circle. This 96 sided figure almost (not completely) overlapped with circle and now he could get almost exact value of pi by dividing the perimeter of that figure by the diameter of circle. This was the lower limit of pi. Higher limit of pi was calculated by inscribing circle in triangle and repeated the same process to obtain value of pi. On average the value of pi was calculated as 3.14 which is very good approximation.

Once the king of Syracuse gave his golden crone to Archimedes and asked to find whether goldsmith had cheated him by adding some non-gold particles and Archimedes while having bath discovered that volume of water displaced is equal to volume of body immersed in water. By obtaining this method he started running naked in the streets shouting ‘Eureka’ which means ‘I found it’. After demonstrating same with the crone he found that goldsmith had actually cheated by adding more silver particles to have same weight as that of pure gold.

[/wptabcontent]
[/wptabs]
Soon after the death of Archimedes and rise of Roman Empire, interest in mathematics for Greeks was lost. There were still some good contributions were made in mathematics by Eratosthenes, Heron etc in calculating the circumference of earth, distance between earth and sun, finding square root, calculating area of triangle when all its sides are known, etc. but now they were considered as Roman era.

But by almost by 100 AD mathematics especially geometry was died in that part of world and also due to the cumbersome numerical system of Roman they could not do much in arithmetic’s until Hindu numeral system arrived in Europe around in 1000 AD.