Various important events and important contributions were made in the period 500 BC – 400 AD which we call it as Post Vedic period. Religions like Buddhism, Jainism were formed; first Indian scripts- Brahmi scripts (derived from Kharoshti scripts) were recorded and which led the foundation for Devanagari numbers which ultimately led to the numbers which we follow today, epics like Ramayana and Mahabharata were written, complete treatise on Sanskrit grammar which was prepared by Panini and is even followed today, etc.

[wptabs style=”wpui-narrow” effect=”slide” mode=”horizontal”][wptabtitle] Jaina & Buddhist Mathematics[/wptabtitle] [wptabcontent] Jaina mathematics is one of the least understood chapters of Indian mathematics, mainly because of the scarcity of the work. Jain religion was formed by Varadhamana (Mahavira) around in the period 570 BC. Jaina mathematics is termed as mathematics which was followed by those who followed Jainism and was seen in the period 400 BC – 200 AD. Jaina mathematics could be seen written in various Sutras like Surya Prajnapati, Bhagabati Sutra, Sthananga Sutra, Jambudvipa Prajnapti , Vaishali Ganit, Uttaradhayyan Sutra, Anuyoga Dwara Sutra, Tiloyapannatti, etc. Many topics on mathematics were discussed in Sthananga Sutra: arithmatic operations like multiplication, division, subtraction, addition; Number Theory; Geometry;Mensuration of solid objects like sphere, cylinders,etc; fractions; Solving simple, quadratic, cubic, biquadratic equations, laws of indices and Permutation & Combinations. Like people from Vedic period, Jaina mathematicians were also interested in cosmology and large numbers.

Jain cosmology says universe, as an uncreated entity, existing since infinity,the shape of the universe as similar to a man standing with legs apart and arm resting on his waist. This Universe, according to Jainism, is narrow at the top, broad at the middle and once again becomes broad at the bottom.

Pingala was born in the 4th century of BC and was the younger brother of Panini. He used the concepts of mathematics in his work Chandahsastra, a Sanskrit poetry.

Panini born around 6th century BC is well known for his formulation of rules, grammar, semantics of Sanskrit language written in his treatise ‘Ashtadhyayi’. Panini’s scientific theory of Sanskrit is marked as the beginning of Classical era of Sanskrit and his work was so complete and correct that it is followed still today.

He followed the Patterns of long and short (modern patterns are with 0’s and 1’s) Example: In his pattern of 4 syllables, he used them as

Fibonacci series can also be seen in these patterns. Taking 1 unit for S and 2 units for L we have.

These patterns were discovered by Gopala and Hemachandra from the poems of Sanskrit around 1000 years later and are named them as Hemachandra-Gopala pattern of numbers. But these numbers today are known as Fibonacci series as these numbers were introduced to the western world by Fibonacci, born around 50 years after them, through his book “Liber Abaci”. 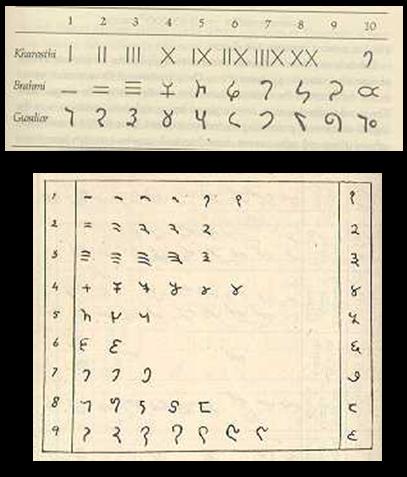 2nd Image shows the Transition of Brahmi Numerals over the years.Zero was not yet invented.

This manuscript is the ancient Indian manuscript written on birch bark which was found near the village of Bakhshali which is in Pakistan today. Not all barks are found, some are still missing while many are destroyed/scrapped. Bakhshali manuscript is considered as the oldest Ancient Indian Mathematical manuscript. These manuscripts are from 200 BC – 400 AD. (End date is not known exactly but it is surely before Aryabhatta’s time as in the scripts 0 was denoted by Dot).

Fractions were not so different to that used today, written with one number below the other. No line appears between the numbers as we would write today. Another unusual feature is, the sign + was placed after a number to indicate -(subtraction)/negative number.